was with my family (my very young family, i was not even 10) in family basement that wasn't and my dad went upstairs, just walked upstairs in the middle of a nothing, a minor nothing, but it was significant because he wasn't communicating and being part of the family. he just walked upstairs as his own person living separately in the house, with an unresolved issue that he didn't care to iron out. soon after, i called him back downstairs, yelling several times until he came down and sat next to me on the couch. i told him how i felt without any fillers or hesitation, that he wouldn't walk upstairs like that again, and in the middle of telling him i got up from the couch, stood in front of him and looked him right in the eyes. i could see his eyes so clearly, they were this beautiful dark but not quite dark brown color, almost a touch of a very dark blue (have never seen anything close to this eye color except on a picture card of a saint maybe), and his eyes still held some kind of receptive quality, though on the cooler side, but he was listening and taking it in and it was very scary feeling that vulnerable and being that direct about everything i was feeling but he let me say everything i had to say without interrupting, just letting me know with his eyes how far i could go. and his face was his young face, thin, and his part was his young part and he had no facial hair, flawless skin, dressed well, shiny button-up tucked in to his slacks. his eyes said he loved me deeply. this was the moment that it would have taken to make things right. i knew my mom couldn't do it, she had walked away after he went upstairs anyway. i knew i had to handle it myself. and at the end of saying what i had to say to him, i said, thanks papa. and he picked me up and carried me in his arms up the steps. 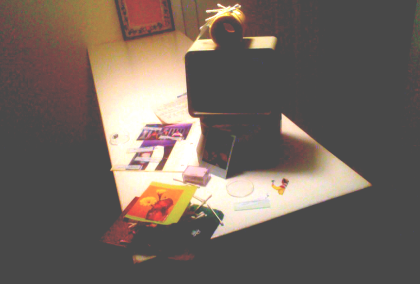